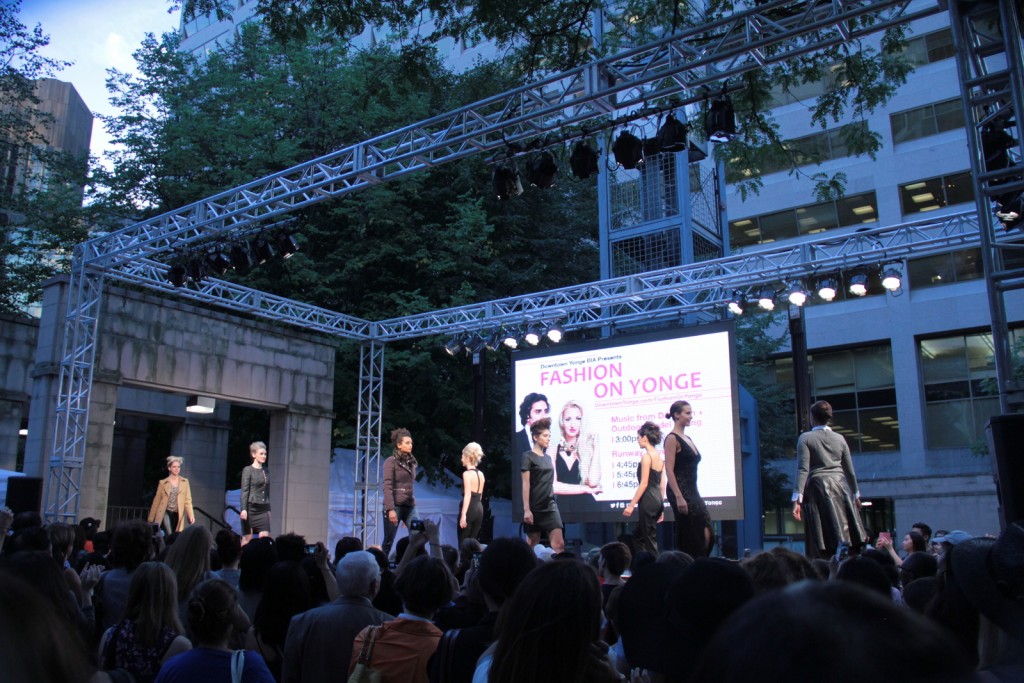 Fashion on Yonge is back and bigger than ever. The second annual fashion show hosted by Downtown Yonge BIA, took place on Sept 3 in Trinity Sq. After a musical introduction by the instructors at Hard Candy Fitness Studio on Yonge St., the latest fall trends were showcased in three 30 minute fashion shows which were themed urban, vibe and chic. Whether you wanted to take in a fashion show after class, promote your brand among other business professionals or explore Toronto culture for the first time, there was something for everyone. Jennifer Hingston, 31-year-old Toronto resident and art enthusiast, thinks the show did a good job of representing street style, but would have liked to see some bolder outfits on the male models. “You could definitely see some pretty commercial venues and I think the women looked a little bit stronger than the men. The men’s fashion, well I would have liked to see a little bit more funk there. It was pretty safe,” said Hingston, a regular attendee at Toronto’s cultural events. Fashion on Yonge was also held this time last year and gained enough popularity that it was brought back. Downtown Yonge BIA hosts several events such as these to encourage and promote local business. For example, Spellbound Hair Design Toronto sponsored the event and did the hair and makeup of all the models during the show.

Inglot, a Polish cosmetics chain that will be opening its doors on Yonge and Dundas on Sept. 13, was happy to use the fashion show as an advertising experience, according to Downtown Yonge BIA representative Cheryll Diego.

Christopher Selvam, a sales representative for Inglot agreed. “It’s absolutely great. We have a huge lineup!” Diego also described how Downtown Yonge BIA has over 2000 member businesses in Toronto, yet approximately 20 members jumped at the chance to participate. “I’m hoping that next year we’ll engage more members. We give an open invitation to all our members but it can be difficult for the services to get involved because we have to sit down with them and brainstorm as to how they can do the theme,” said Diego. Manning the Downtown Yonge BIA booth during Fashion on Yonge was Rebecca Stubbs, the receptionist and office assistant, who described the benefits of an event like this. “It gets people aware of all the resources they may not know about. In this case, health and beauty. We give the opportunity to everyone.” Gemini Models, based in Kitchener, provided the modelling talent, many of whom participated in the show last year and continue to look forward to it.

“It’s a wonderful experience. I love that it’s outdoors so we get to be part of the community,” said clothing model Julia C. who asked that her last name not be used. She hopes to participate in the show again next year. The only downside is that she wasn’t able to keep the clothes. “It’s so much fun and I would wear these every day.” Overall, the evening was a successful one that attracted a diverse audience of different ethnicities and ages, and received an overall positive response from all who attended. “I try to go out and see what Toronto has to offer. There are so many great free festivals and it’s a shame not to go out and try them,” said Hingston.